In this devlog I will showcase my experiments with Houdini and achieved results.

In the previous blog post I mentioned that I started to learn Houdini and Houdini Engine in particular to create procedural assets in Unity.

I liked it so much so I decided to dedicate all my spare time to procedural assets creation. I tried to make not just abstract or generic stuff but something that I can later use in my game. Just a reminder that I have planned following visual settings for my game:

So far I managed to create following procedural assets.

Chains quite often used to decorate environment in games. I plan to use them in underground ruins and mechanical valley settings.

In fact I made 2 assets.

The first one is spline-driven chain. Level designer sets up the spline shape and chain follows it. It is convenient when you need to wrap chain around something or put them nicely on the floor.

As you probably noticed you can also customize chain links. In the inspector you can specify:

Cogs are one of the key elements in mechanical valley so it was an obvious choice for the next procedural asset.

Even though cogs don’t seem too complicated, in practice its appeared to be that creating parametrized cog that will connect properly with other cogs require some amount of formulas and interconnected parameters inside Houdini. So it’s not a trivial task but after some time I managed to make it work as expected.

This asset works the same as spline-driven chain above but geometry is more complex and there are more parameters to tweak.

Right now this is the only asset that I plan to use not just like decoration but as part of level topology that will connect platforms in the floating islands setting.

Player should be able to collide with this object to run on top of it. When you bake this asset Houdini Engine assigns proper Layer so Character Controller will treat it as a surface. It also generates simplified geometry and assigns it as mesh collider. 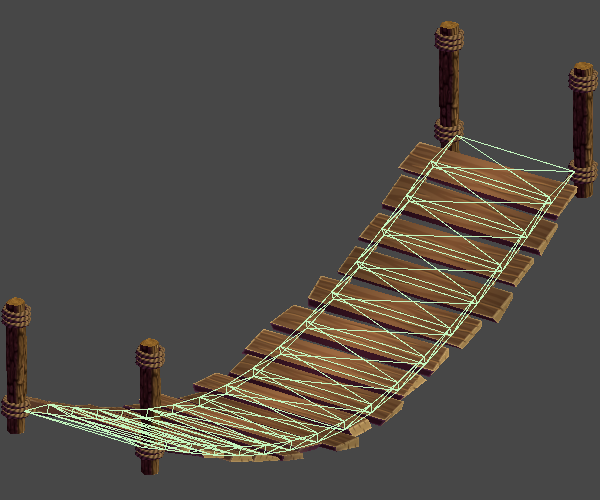 For now Houdini is my favorite software… after Unity of course, I’m making games after all. I will keep working on my procedural assets library and going to start level blocking and level design.